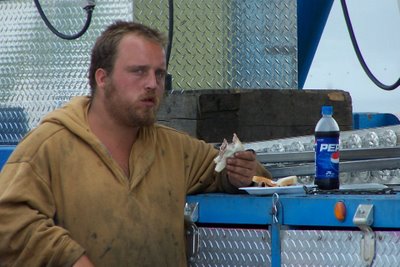 Say Hi to Joe. Joe nearly nipped this little project in the bud when during one of my very first attempts at pointing my camera at living subjects he immediately came over and told me "No cameras" and wanted to know what I was doing. I later found out he felt he was protecting his crews. Most of my images of him after that came at the end of a long telephoto lens. 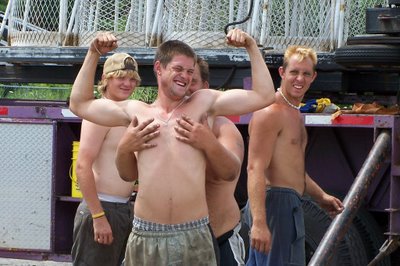 He has yella eyes like a rabid dog, the strength of 10 men (Although I'm told it's kept deeply in reserve, very deep), he is quick to judge and fiercely loyal. He's also got a smile that STUNS you with it's brightness and quick display. 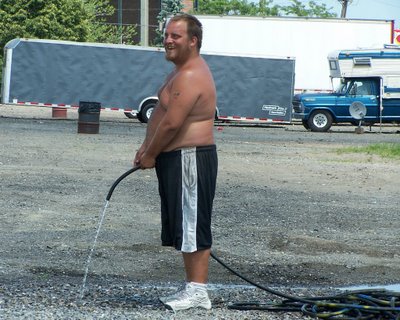 When I told him I was going to do a little post about him, I said "And guess what photo I'm going to use." and he immediately said "The hose." So he is also quite astute with all things 'art'. 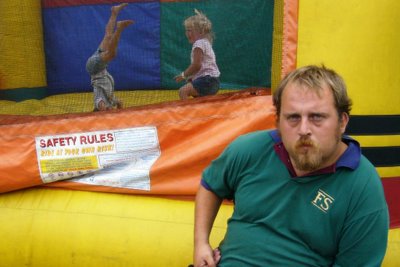 The safest people on the Midway? Joe's little charges seen behind him. The second safest? You, once he decides he's got your back.

jkirlin
Everything I call my own, I stole from you. I can see into your soul with my one good eye.

'The Thing of the Moment' refers to the act of taking photos and posting them online; Never to the subjects themselves. Your lowly and humble photographic servant wishes to thank the subjects who appear, knowingly or unknowingly, in this work for their infinite kindness and patience.

"The Carnies" is one installment of a multi year photography project. A collection of over 5000 images per season chronicling the work by the people involved in the rides, games, and food concessions by one show, Fiesta Shows, at one spot, The Bangor State Fair. What you see here is a selection of the work in progress inspired by the work of photographer Amy Toensing (in particular, The Jersey Shore) and Mark Knopfler (Devil Baby) The term 'Carnies' is rarely used by the carnies themselves, they are showpeople, ride jocks and crews, wire runners, jointees (game workers), and food concessionaires and, as was pointed out to me in the off season, people like you and me... only harder working. Photos are, of course, posted in reverse chronological order. Efforts are made to include shots as suggested by Carnies of series past and may be of interest to a limited viewing audience. It is a privilege and an honor to have had the access that they allow me. I thank them here for their cooperation and endless patience.

Links and past seasons